The Debabeler is a robust and extensible tool used to create and customize translations between medical image file formats. Its visual programming environment provides an intuitive and easy way to modify a variety of existing translations to meet researchers\' needs. 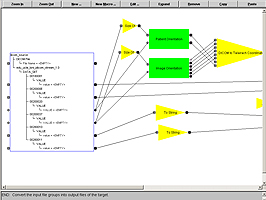 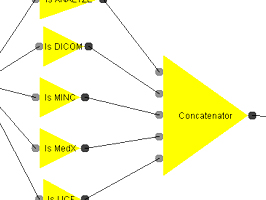 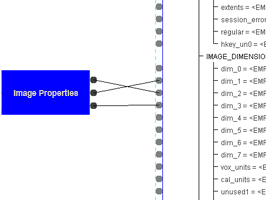 LONI Debabeler manages the conversion of imaging data from one file format and convention to another. It consists of a graphical user interface to visually program the translations, and a data translation engine to read, sort and translate the input files and write the output files to disk. The data translation engine: (1) Reads metadata from a set of image files on disk to identify the source that produced each file; (2) Groups the image files into user-defined collections using image metadata values; (3) Translates each image file collection by reading metadata and pixel data and mapping the data into the appropriate output file format through a programmable set of connected modules. The Debabeler uses the Java Image I/O Plugin Architecture to read and write a wide variety of common medical image file formats, including ANALYZE, MINC, and most variations of DICOM. Debabeler is a robust and extensible tool that is useful for creating and customizing translations between file formats. A large number of file formats and a variety of translations are already supported, but the advantage of the visual programming environment is to make it easy to alter existing translations of the data. The Debabeler de-identifications have been added to the LONI De-identification Debablet. The source code for the medical image file format decoders and encoders used by the Debabeler is available in the LONI Image I/O Plugin download. View the before and after results of Debabeler translations with the LONI Inspector.

Currently, only the executable is distributed via the website.

Before running the Debabeler, you must verify that you have Java version 1.4 (or later) installed on your machine. You can install the Debabeler in any directory. To start the Debabeler, use the appropriate shell script or batch file (Windows) for your operating system.

Medical imaging data is typically collected and stored to disk by encoding it into a particular file format. Examples of medical imaging file formats that are commonly used include ANALYZE, MINC, the many variants of DICOM, and proprietary formats used for fMRI and MRS data. Despite efforts to standardize file formats, there are invariably significant differences in how each of them is implemented and used; that is, within a standard, there is considerable variation in which elements are available, how data is stored in those elements, and how to interpret the data that is stored in those elements. Therefore, knowing the file format alone does not provide enough information to enable a user to appropriately extract and use all the metadata. This can be particularly important because federal guidelines now require that information that might identify a patient or research subject be removed from most research data. The LONI Debabeler addresses these issues by enabling users easier access to image metadata and providing users a flexible and programmable environment in which to manipulate metadata between file formats.